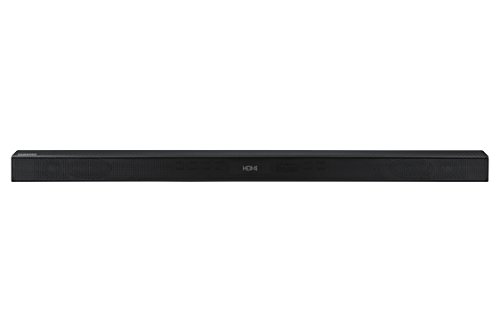 For some people, inbuilt TV speakers may suffice. But once you have a taste of what even a cheaper sound system has to offer, there is no going back. Limited bass, muffled sound – these things characteristic of inbuilt speakers become unbearable.
Fortunately, you do not have to spend a fortune to buy yourself a good 2.1-channel sound system. Samsung HW-M450/ZA is one of the systems that doesn’t cost too much money, though it definitely isn’t exactly cheap either.
If you happen to be looking for a mid- to high-end 2.1-channel speaker system, then our Samsung HW-M450/ZA review will probably be of interest to you.
Features
Solid sound for mid to small rooms
The HW-M450/ZA sound system isn’t a particularly powerful one. The total 320W power output of the system – of which 160 watts are produced by the soundbar and the rest by the subwoofer – may seem like a lot, but it’s actually not that plenty for a sound system.
However, this is more than enough for mid- to small-sized rooms. Not everyone needs a high-power speaker system, so the 320 watts of total power delivered by the soundbar is more than enough for probably most interior settings.
The frequency response range in the Samsung HW-M450/ZA is very good as well. Ranging from 40 to 20,000 Hz, the frequency response of this 2.1 speaker system allows for a rather clear sound both when it comes to music and movies.
Dedicated subwoofer

A remarkable feature of the HW-M450/ZA sound system is that it comes with a dedicated 7-inch subwoofer with a 160W output. Thanks to the subwoofer, this system doesn’t sound bland and overly flat. On the other hand, the bass isn’t too strong either to become a distraction during movie watching sessions.
Some people think though that the bass strength is quite underwhelming for the amount of sound the soundbar delivers. There is some room for the adjustment of the bass in this sound system, but lovers of bass probably won’t be too satisfied with it.
We, however, think that the HW-M450/ZA system delivers quite a good bass, especially compared to its competitors in the price range.
5 sound presets
The HW-M450/ZA sound system has 5 built-in sound presets – Standard, Music, Clear Voice, Sports, and Movie – for those who don’t want to deal with adjusting bass or treble. And given the great frequency response range in this sound system, each of the modes should be able to deliver what you would expect from them.
If you’d like to dive a little more into the settings, then the bass and treble adjustment options are for you. This sound system isn’t that much adjustable, but it delivers enough customizability to allow most people to enjoy its sound in full.
A plentitude of connection options
The
HW-M450/ZA

sound system also has plenty of connection options to boast. Like its younger brother HW-M360, this sound system supports Bluetooth connection, as well as has an optical input. Aside from it, it has an HDMI input, HDMI output, an analog input, and supports 3D Video Pass.
A notable feature in the HW-M450/ZA system is HDMI ARC (Audio Return Channel). It isn’t a new thing on the market, but a lot of people aren’t even aware of its usefulness.
If you plug HW-M450/ZA into an HDMI ARC port in the TV, you will be able to shift the HDMI connections of your game console, Blu-ray player, and other devices to the sound system’s HDMI input instead of the TV’s input. No additional setup and receivers are required. This feature is especially useful if you have your TV wall-mounted and can’t access its HDMI ports.
Mobile app control
Samsung includes a remote control with the HW-M450/ZA sound system, but it isn’t the only tool you can control the system with.
Via the Samsung Audio Remote app, you can control the sound system through your Android mobile device. So yeah, you don’t always have to look for the remote when wanting to adjust the sound.
Unfortunately, the Audio Remote app is only available to Android users, so owners of Apple smartphones and tablets won’t be able to enjoy its features.
Surround sound upgradability
HW-M450/ZA is a 2.1-channel sound system, but Samsung provides you with the option to turn it into a 4.1-channel system. That’s possible thanks to the Samsung SWA-8500S wireless rear speakers that cost around $130. If you don’t have the budget now but plan to switch to surround sound in the future, this may be a very beneficial option for you.
Pros & cons
Samsung HW-M450/ZA Soundbar

Pros:
• Solid sound quality for small- to mid-sized rooms.
• Plenty of connection options, including Bluetooth, optical-in, and HDMI in and out.
• Supports HDMI ARC.
• May be controlled via an Android device.
• May be upgraded to 4.1 channels.
• Optical cable included.
Cons:
• The Audio Remote app isn’t available for IOS.
FAQ
Is there any difference when using HW-M450/ZA with Samsung Smart TVs?
Setup generally is quicker and easier with Samsung Smart TVs. In addition, a thing available for Samsung TVs is that you may set up the Smart TV remote to control the sound system.
Does this sound system come with cables for setup?
Samsung includes a 58-inch optical cable and a power cord with this system. No HDMI cables are included with it, so you’ll have to get them separately.
Do you need a smart TV for this sound system?
As long as the TV has an optical or HDMI output/ARC, it will work with the HW-M450/ZA system. But a smart TV would be easier to set up with HW-M450/ZA.
Can you connect additional speakers to this sound system?
Yes, as we mentioned above, the HW-M450/ZA system works with Samsung SWA-8500S wireless speakers.
Conclusion
Overall, the Samsung HW-M450/ZA 2.1-channel soundbar definitely is a solid sound system for the money. It can’t boast too much oomph, but it has quite enough power in it for small- to mid-sized rooms.
Some people may find the subwoofer lackluster for the sound level, though in some cases, it is more the people’s expectations that aren’t met. The subwoofer doesn’t need to produce glass-shattering bass, albeit some people like more lower frequencies in their sound systems.
Nonetheless, we think that this soundbar offers great value for the money!