You are here: Home /Vizio / VIZIO-SmartCast-Wireless-Soundbar-System/dp/B0727XPHKF 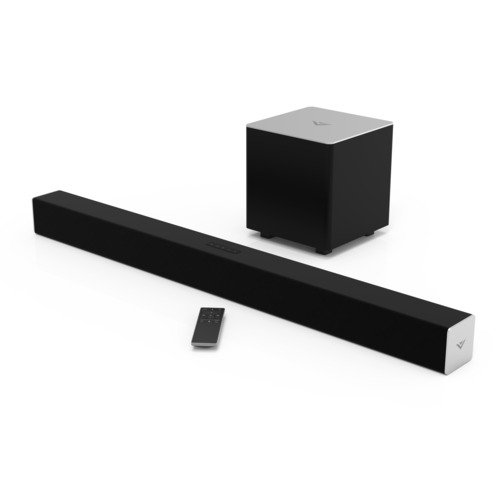 -System/dp/B0727XPHKF
A home theater is a huge step up from a TV’s inbuilt speakers. Even if you already have a decent stereo system, a home theater would make a big difference for you.
However, home theaters are usually quite expensive, and not everyone has the desire to spend $300 or more on a home theater system.
Well, you don’t actually need to do that. The Vizio SB3651-E6 5.1-channel system is a great example of a not so expensive home theater that delivers excellent sound quality. It isn’t exactly a budget system, but it doesn’t cost a fortune either.
Now, let’s proceed to our Vizio SmartCast SB3651-E6 review to see what this sound system has to offer!
Features
5.1-channel surround sound
The most notable thing about the Vizio SB3651-E6 sound system is that it has 5.1-channel surround sound. It consists of a central soundbar, two side satellite speakers, as well as a subwoofer.
In terms of sound, the Vizio SB3651-E6 system is great, especially given that it doesn’t cost that much. The main contributor to this is the frequency response range of 50-20,000 Hz, which allows for good coverage of lower, mid, and higher frequencies. This should allow for clear sound whether you are listening to music or watching a movie.
When it comes to loudness, the 101dB sound pressure level demonstrates quite clearly that SB3651-E6 is a loud sound system. Unfortunately, Vizio doesn’t provide information on this system’s power output, which would make it easier to determine how loud it can get.
This sound system also employs sound enhancement technologies like Dolby Digital, DTS TruSurround, DTS TruVolume, and others. DTS TruVolume is quite remarkable: it adjusts the volume levels throughout the watching to keep the sound more consistent and less intrusive. This system should make sure that loud sounds aren’t blowing out your eardrums and that quiet sounds are well-hearable.
Lastly, there are 3 preset equalizer settings in this speaker system – Music, Direct, and Movie – which make good use of the frequency range of this speaker in gaming, music listening, and movie watching.
Various wired and wireless input options
The Vizio SB3651-E6 5.1 sound system has a rich set of input options, both wired and wireless. Among the wired inputs are 3.5mm AUX, HDMI, USB, and even Ethernet. As for wireless input options, you have Bluetooth and Wi-Fi to choose from. With these riches, you should be able to connect pretty much any audio device to this speaker system.
Aside from an HDMI input port, the
Vizio SB3651-E6

system has a two-direction ARC (Audio Remote Control) HDMI out port. This port allows you to connect HDMI devices like cable boxes, game consoles, or Blu-ray players to the sound system so that it then transfers the video signal to the TV. What this allows is more convenient and tidier setup, especially if you don’t have free access to your TV’s HDMI ports.
Unfortunately, it seems that the ARC function works at resolutions no higher than 1080p. So if you have a 4k TV at home, you probably won’t be able to make use of ARC. But overall, the speaker system will work just fine with any TV that has one of the supported connection options.
Judging by user reviews, there also are some occasional connection issues in this system, especially with wireless connection. These issues are rare though, so you shouldn’t worry about it too much. In some cases, they seem to have been caused by the system’s Eco mode which shuts down the speakers if they are left unused for some time.
Versatile sound controls
Remarkably, the remote control included with this speaker system provides you with a lot of adjustability for the sound. Among the things that you can control with the remote are the bass & treble levels, the surround balance & level, center levels, subwoofer levels, switch the surround on/off, and many other things.
You may also control the speaker system via an Android or IOS mobile device through the Vizio Smartcast app. This adds a little more convenience to this sound system since you won’t necessarily have to look for its remote to adjust the sound.
Not so steep price
And possibly the best thing in the Vizio SB3651-E6 5.1-channel sound system is that it doesn’t cost too much for what it offers. It’s not too cheap, but compared to high-end home theater systems, it sure is priced rather attractive.
Pros & cons
Pros:
• Very attractive price for what it offers.
• Great surround sound quality.
• Has plenty of wired and wireless input options.
• Supports HDMI ARC.
• Offers a plethora of sound adjustment options.
• May be controlled via an IOS or Android device.
Cons:
• HDMI ARC works at up to 1080p resolutions.
• Occasional connectivity issues.

/dp/B0727XPHKF
FAQ
Does this system work when the satellite speakers are not connected?
Yes, if you don’t need surround sound, you may unplug them. You may also toggle surround sound on or off via the remote or mobile app.
Are the satellite speakers wired or wireless?
They are wired and connect to the subwoofer.
What are the mounting options for the Vizio SB3651-E6 sound system?
You may set this sound system in any way you’d like, for example, on speaker stands or on a wall. The satellite speakers work with universal mounts and stands, so you shouldn’t have a problem with it. Keep in mind that for the best sound, the speakers and the soundbar should be close to ear level.
Do you have to download the SmartCast app to get this speaker system working?
No, you may just stick to the included remote.
Does this sound system come with all the cables?
Pretty much. Vizio includes a 5 feet 3.5mm cable, a 5 feet RCA/3.5mm mini jack cable, a 5 feet optical cable, a 5 feet digital RCA cable, as well as a 5 feet HDMI cable, which should be enough for you to get started.
Conclusion

delivers quite the value for the price. It doesn’t offer the best sound and bass on the market, but it does boast a solid sound which is probably going to be enough for most people, even those who’ve previously experienced high-end sound systems. Overall, we think that Vizio SB3651-E6 is an excellent system for the money.